Some of my favourite paddling areas are along the coastline, south of Adelaide.  Accessible for paddlers with appropriate “kayak sea skills” and a properly fitted out sea kayak the West Island of Victor harbor is a perfect day paddle…. Ian “Paddling South”.

I had been invited to join 3 paddlers who were spending a beautiful spring day exploring the area of West Island, just offshore from Victor Harbor, which is 83km south of Adelaide.

This is a great place to paddle in calmer conditions and can test your ability in fresher conditions due to the prevailing swells from the Southern Ocean and clapatis from the granite headlands.

Shauna, Steve, Shaun and myself set off in what was predicted to be a 10-15kn Northerly wind , but was actually a 10-12kn South Easterly. That’s fairly typical on this southern coast where things rarely go to plan, and there is always the possibility of sudden and sometimes severe weather changes. 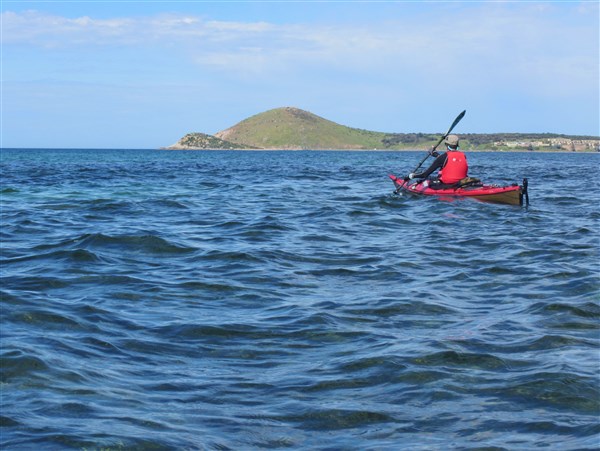 Leaving Kent Reserve in the Davenport Anchorage our plan was to pass on the inside of Wright Island, head out through Shark Alley which is the passage between Wright Island and the mainland Bluff, then head along the coast to West Island. 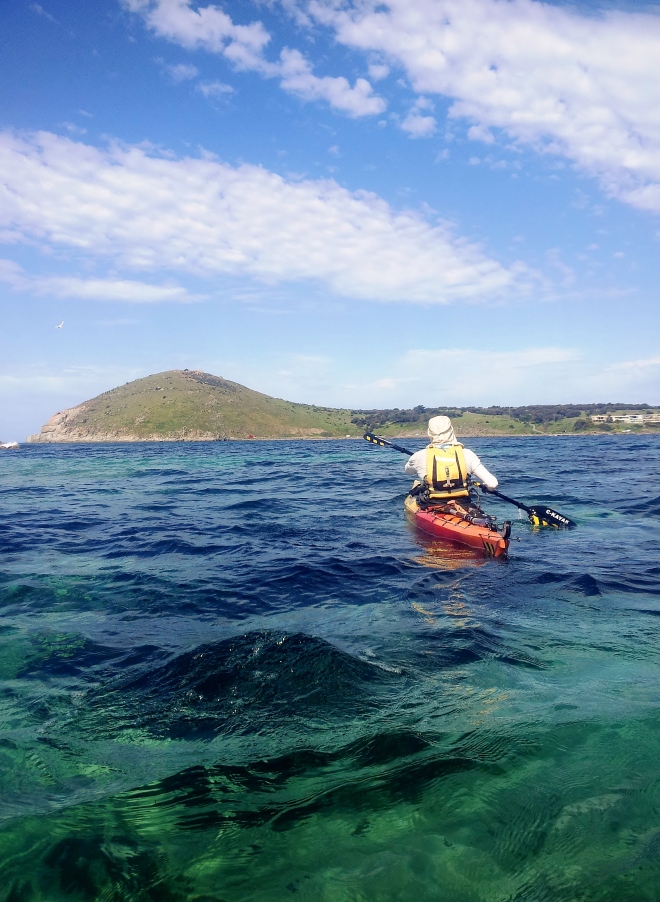 Steve on his way to The Bluff

The SE wind made for good time to Wright Island where we passed close to its’ small beach. 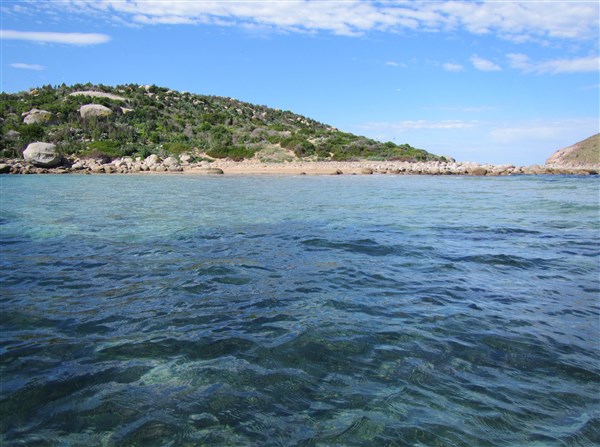 I was able to pass very close to its’ western side.

The western side of Wright Island. Calm today but normally hit by SW swells.

As we cleared the wind break of the island the winds and opposing  swell, combined with clapatis from the Bluff to give us a bumpy ride. (If you are not totally comfortable here, turn back now !!).

We were able to get in quite close to the south side of the bluff and could see a group of rock climbers on top of a large granite slab. 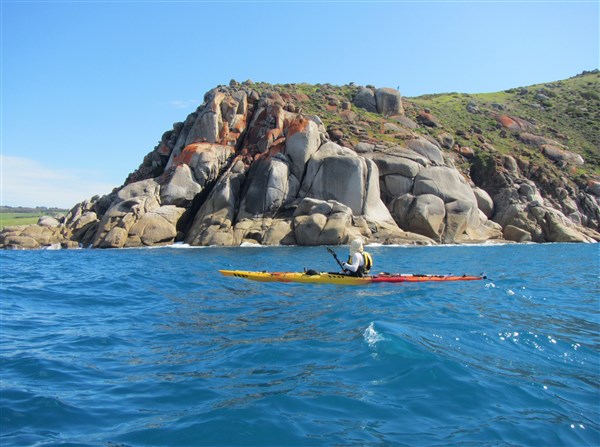 We could see West Island ahead of us.

King Beach on the right as the cliffline starts 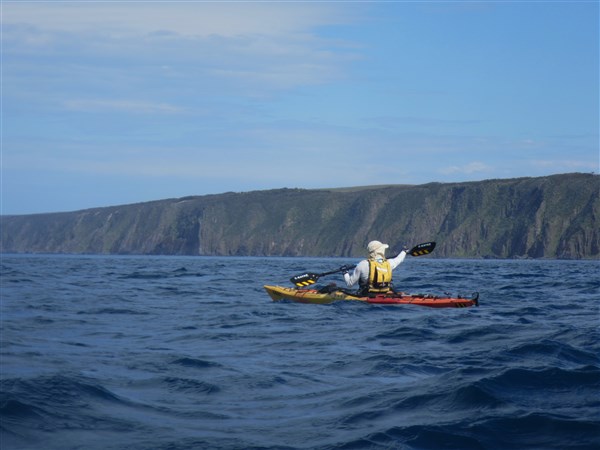 West Island is a 10 ha granite island that rises to a maximum height of about 40m in the south-west. Its main conservation value lies with its seabird colonies and small marine research station.

During the 1880’s it was quarried for granite to construct the foundations of Parliament House, Adelaide. From 1913 until the mid-1960s it was zoned as a Reserve for Government Purposes and, for a short period, was used by the Adelaide University Regiment as a target for gunnery practice during field exercises. In 1966 it became a fauna reserve. It was declared a Conservation Park in 1972 and in 1973 and 1975 Pearson Island rock-wallabies were introduced to the island. I am still to spot one of the wallabies on the island so maybe they have not fared well.

The island has a number of NZ fur seals who were lazing on the granite boulders or swimming around our kayaks. 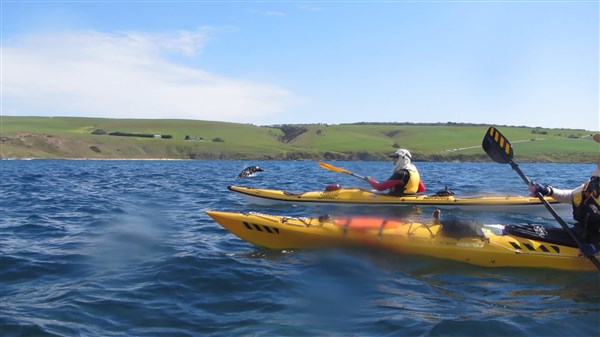 Seals coming out to greet us

…and coming in for a closer look

Shauna tries to capture this guy on film

Breeding seabirds include Little Penguins, Silver Gulls, Caspian and Fairy Terns. The Little penguin population has suffered a dramatic decline since the 1990’s. In 1992, the population was estimated to be around 4000 penguins. In June 2011, the population was estimated to be less than 20 penguins.The decline echoes the decline of the colony on nearby Granite Island and many other island in the southern ocean and the cause is still largely unknown.

Shaun investigating where granite has been mined in the past 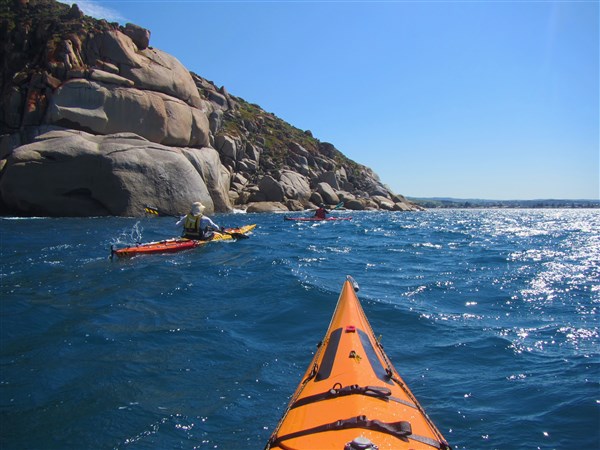 Western side of the island where the water is 30m deep

Shaun having a closer look at the coastline 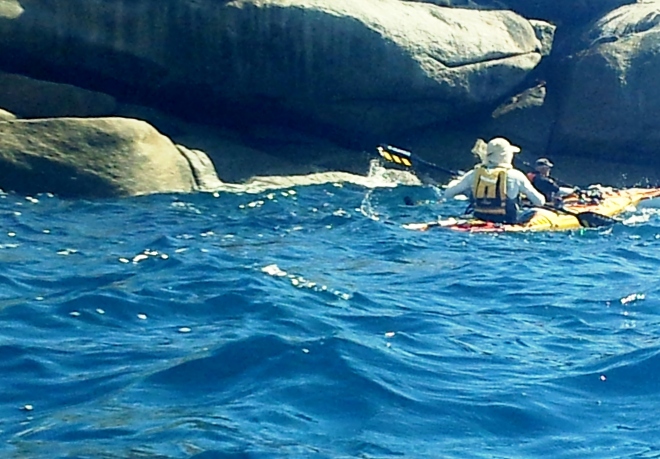 It’s getting a little bumpy now

………….with Steve playing for a while in “rock gardens”. 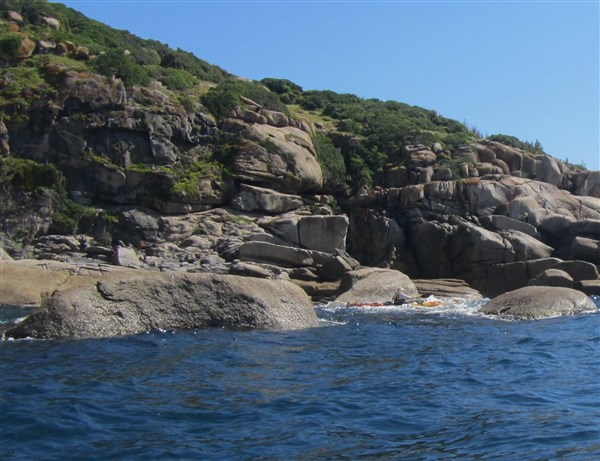 We then steered a course back to Wright Island and its’ small beach as the wind started to swing to the predicted NE direction. A great spot for lunch. 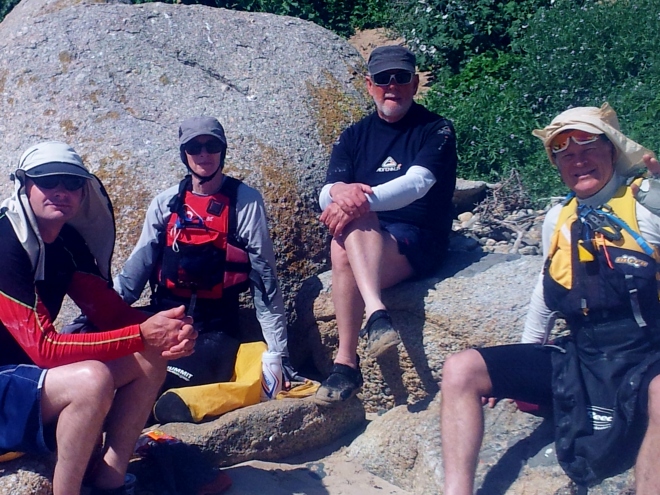 ….followed by a head wind paddle back to our starting spot made for a very enjoyable day. 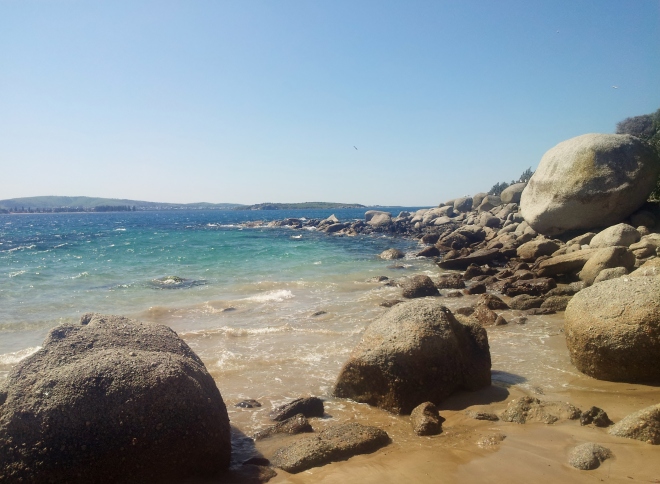 This is an excellent place for exciting paddling especially as the swell and associated clapatis increases. It should only be paddled by those with the appropriate sea skills and of course a properly fitted out sea kayak.

Hazards. A number of dangerous rocks are charted as well as reefy areas. Clapatis from the headlands can make for a very confused sea in some places. Swell may break in some parts of Shark Alley. Consult marine chart before attempting. Avoid Petrel Cove, west of Rosetta Head due to rips and dangerous rocks.