Venus is the Greek Goddess of Love and Beauty, among other things, and we have been wandering along a coastline that we certainly Love. Its’ Beauty is in the rugged cliffs and sandy bays that dot the landscape along the western coast of South Australia.

Unfortunately Venus was travelling with Euros the God of the South East Wind and he was displaying his might. For several days now it has blown too strong for us mere mortal kayak paddlers to venture out into Venus Bay and then out into the open Southern Ocean. 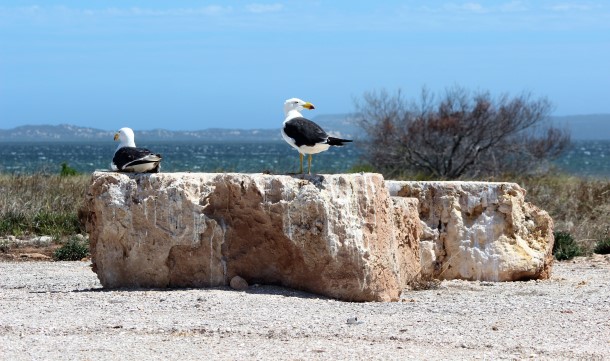 Even the locals stayed ashore today. This was inside the calm bay and you can see the whitecaps on the water

Our plan had been to spend a couple of weeks exploring along the rugged coastline, visiting places that we had been before and exploring some new spots. The coastline between Venus Bay and Smoky Bay is especially beautiful from the water with a series of cliffs towering above and lots of small bays and inlets to explore. In the past we had spent many days paddling and swimming with dolphins and sea lions in Baird Bay as well as relaxing on other deserted beaches.

With the wind howling we couldn’t even get the kayaks off the roof of the car, let alone get to any offshore locations or even into the generally sheltered waters of Venus Bay. 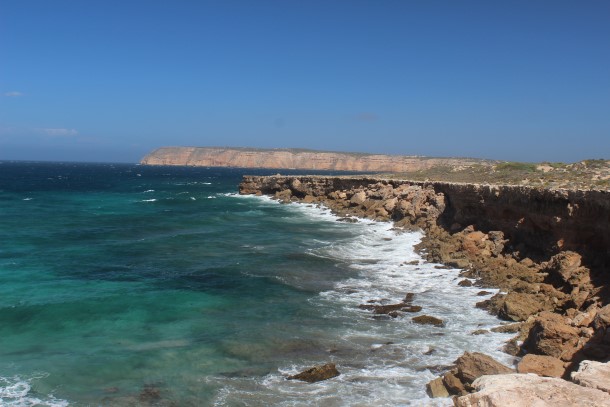 Looking out towards the headlands of the protected Venus Bay

So it was onto the FatBikes for some coastal fun around Venus Bay and across to Entrance Beach. 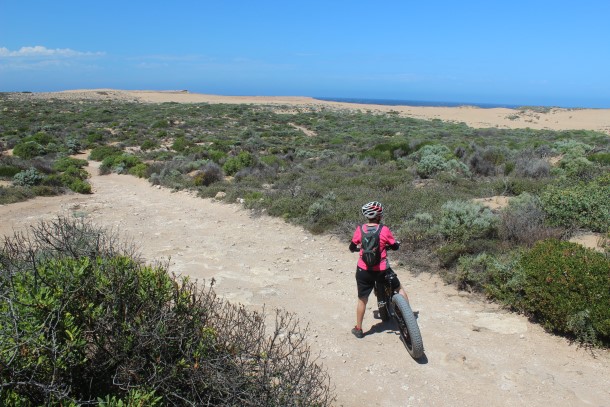 After exploring around dunes we visited the Venus Bay Conservation Park which allowed us access to some wind swept but deserted beaches. The drive gets interesting when you reach the track over the and dunes.

You can just spot the kayaks on the roof of the car as we made our way along the track. The track is marked by posts as the track is lost in the sand

Robyn “the snake charmer” managed to have a chat with a good size brown snake who took off up the sand dune leaving only his “snake trail” in the sand. We didn’t follow.

Snake trails across the dune which were blown away within minutes

This area is quite beautiful with views across Venus Bay.

Looking out towards the islands in the bay

We spent time sheltering out of the wind along with the local inhabitants.

Some of the locals sheltered with us on the beach

The one paddle that I had really hoped to do was a visit to the “Dreadnoughts”, a group of bommies off the coast of Sceale Bay. On a paddle here 17 years ago, with a group of sea kayak instructors, we tried to weave our way through the breaks. Unsuccessfully I might add. The sea was calm and green as we admired a breaking bommie which soon turned to a wall of white foam when a set of rogue waves came through, cleaning up a couple of the group.

Today you wouldn’t want to be out there.

We dropped into the once thriving town of Port Kenny. It had been a port serviced by the Mosquito Fleet of flat bottom boats that carted wheat and other goods from the towns along the coast, in the early 1900’s but sadly there are only a few houses and a pub left. There are remnants of previous travelers.

This was probably a very up-market model in its’ day

We moved west in hope of better weather and camped at Smoky Bay. The wind still blew as we retired for the night.

We awoke to a hot and still morning. With no wind and clear blue skies we quickly unloaded the kayaks and paddled off to explore Smoky Bay.

A quick dip to cool off before heading out.

Calm and very clear water ahead

We paddled for an hour or so to the other side of the bay where there are large numbers of oyster beds.

Oyster beds in the shallow waters of the bay

We saw Cirrus clouds streaking the sky as we turned for home. The wind again started to increase but  at least we had snuck in a good 2 hour paddle for about 900 km of travel and a week of waiting; still that’s sea kayaking for you.