The calm was shattered by a thunderous roar as a swell broke against the headland sending a spray of white water into the air. The calm water paddling we had enjoyed for the last couple of hours was over and we were in for some fun paddling along the “Mystery Coast”.

The swell was starting to rise

We call this area the “Mystery Coast” as the weather is always a bit of a mystery. It’s forecast SE winds and you get NE; 10 knots can be 5 or 20 knots and the swell has to be taken into consideration which is not the best situation for kayakers venturing several kilometres offshore.

The day had started early with preparations before dawn as the predicted weather window of calm winds in the morning and an early afternoon sea breeze, had arrived.  We had seen the end of Blow-vember and the promise of more stable conditions had the group heading westward from Adelaide, the capital city of South Australia, with the hope of visiting some of the rugged and seldom paddled Mystery Coast. 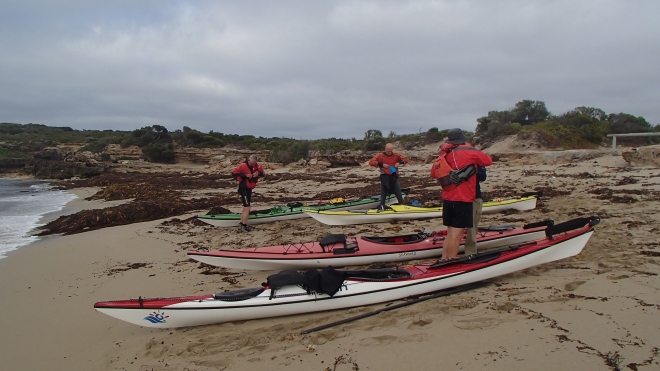 The sea was calm and the sky overcast as we launched. The sea took on an eerie feel as it was difficult to distinguish the sea from the sky and the inky swells rising and falling under the kayak added to the strange sensation.

Eerie conditions and cloud that signals a change coming later

The calm conditions and photo opportunities made Gavin happy

The swells were gentle

We got up close and personal with a cliffs that towered 90 metres above us all the time mindful that those boulders hanging precariously above fell into the sea at regular intervals. The swells lifted us gently and then crashed against the base of the cliffs sending backwash to bounce us around.

We dodged around the breaking waves to get in close 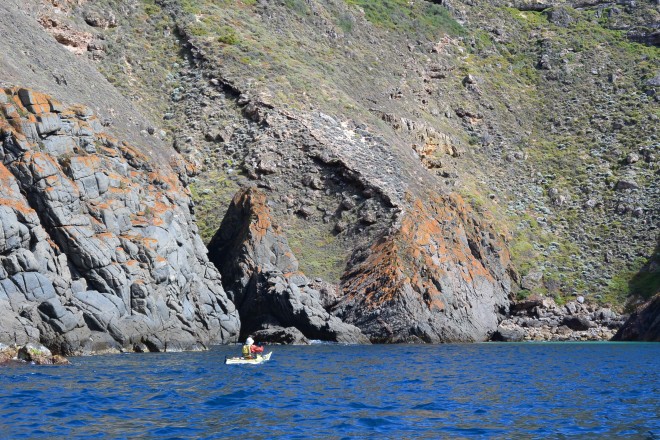 Steve was always on the lookout for another crevice to explore 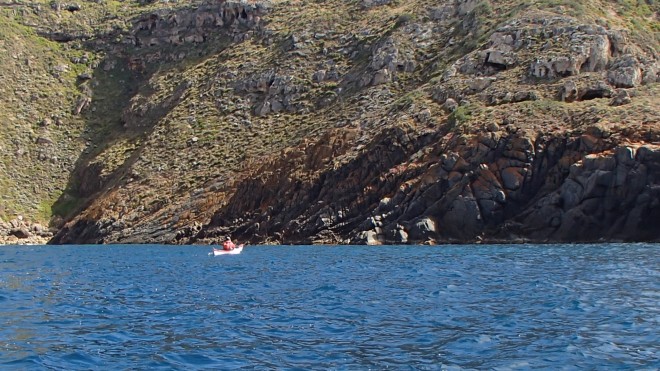 Checking out the clear water

We were able to sneak into small ravines that were sheltered from the wind and swell to enjoy the crystal clear waters and views of the towering granite cliffs.

Rodney heads into a calm inlet 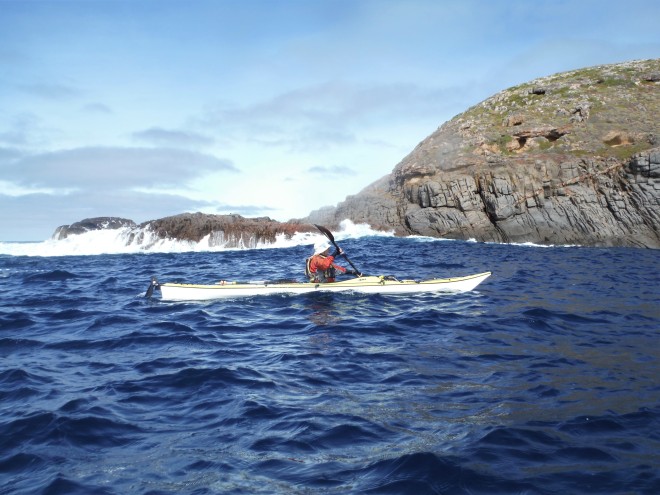 Calm waters in the lee of an island

The area also has some small offshore islands to explore and we paddled close into the cliffs in the lee of the islands and bounced our way past the unprotected sides.  A 10 km paddle out to a sea lion colony increases the senses, especially when you realise that Great White Sharks breed in the nearby reefy waters. 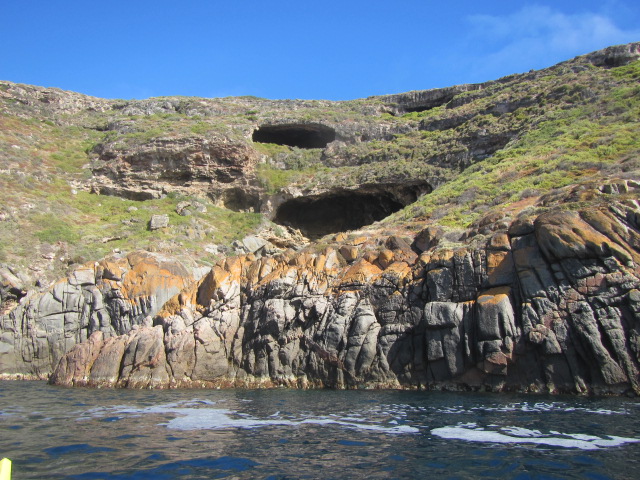 There are many caves at the waterline and above 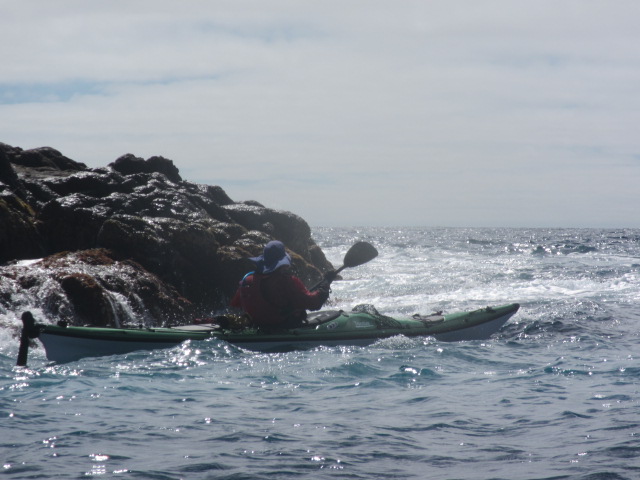 This coast was home to many industries in earlier times and many jetties were built to accommodate the fleet of vessels that carted grain, seafood and gypsum.

Some jetties are still functional… 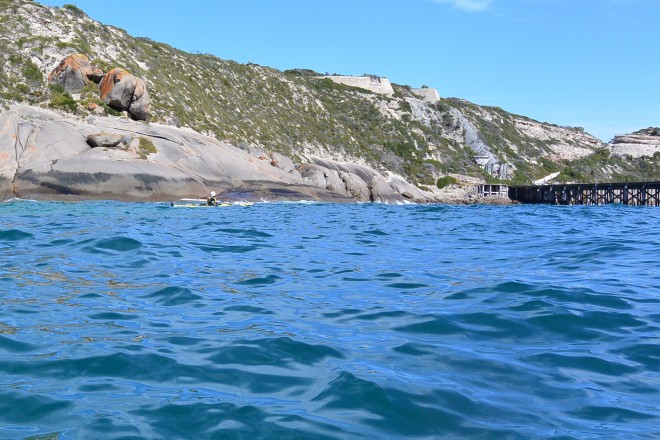 …..and others are about to fall into the sea.

The middle section has collapsed and many pylons are gone

After exploring a number of inlets and caves we were able to land on a small protected beach where Steve serenaded a couple of the locals. 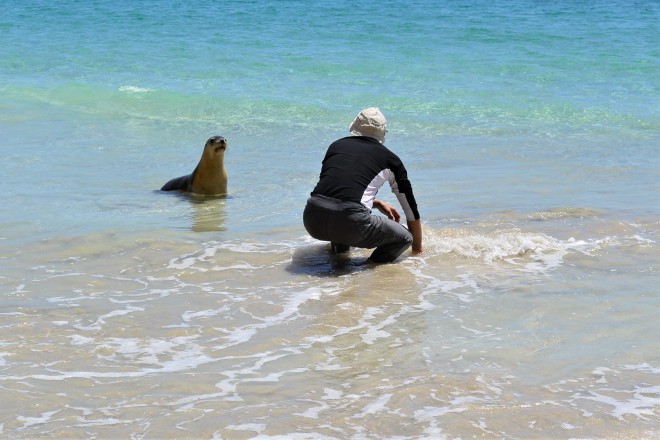 If anyone can “talk to the animals” Steve can.

After a quick lunch on the beach it was an interesting paddle into a confused sea created by the increasing SW swell colliding with the ESE wind driven sea. “Wind against Current” always makes for some interesting paddling and quite often reacquaints you with your support stroke.

The conditions dictated that we stayed close together for the last 2 hours of paddling and we all witnessed a large pod of dolphins fishing under our kayaks. They screamed past, some leaping a metre or more into the air as they zig zagged through a school of fish below us. The fish were forced to the surface by the dolphins and then a flock of seabirds dive bombed from above.

Fascinating stuff, but no one got any photos as at the time it was “both hands on paddle”. This was probably not the best time and place to demonstrate your rolling technique: in the middle of a feeding frenzy of dolphins and sea birds along a coast well known for its Great White Shark population.

After many exhilarating hours of paddling, beach combing and wildlife spotting we made our destination and after much lugging of gear and carrying of kayaks we returned to our campsite.

As is our custom, we celebrated firstly with an icy cold beer and snacks provided by Robyn and later moved on more substantial eats and sampled the red wines from several wine regions in South Australia. Tastings covered the Coonawarra and McLaren Vale regions as well as excellent Shiraz from Koltz Wines of Blewett Springs (McLaren Vale region).

Let me pre-answer some of the questions we normally get from readers and people who meet us on the beach.

Thanks to our paddlers Gavin, Steve, Rodney and Ian who donated their photos to this story and to Robyn for the cold beer, vehicle driving and many other duties.

2 thoughts on “The Mystery Coast”