The Month of May is History Month in South Australia, so with that in mind we packed up our toys and headed North and South looking at South Australian early history.

First it was to the far north of state, towards the centre of Australia, following the old “Ghan” railway line and then branching out to the edge of the Simpson Desert. The Old Ghan railway line was closed in 1980 after the line was moved due to frequent flooding. Robyn’s family have many ties to the north with her grandparents being involved with the Telegraph line that was built between Adelaide in the south and Darwin in the north a distance of 3000km

I never tire of the outback landscape with its’ ever changing colours and geography. 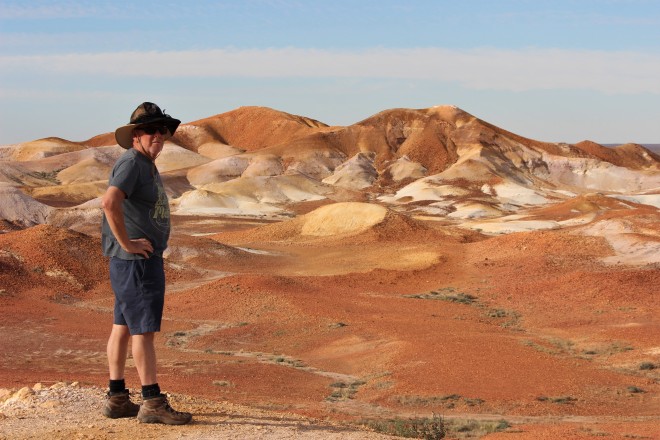 Yep that’s me. The area is the “Breakaways” and juts out from an otherwise flat gibber desert

Stunning colours at any time of the day

We visited many ruins as well as a few surviving outposts  and watched many sunsets across the northern plains. 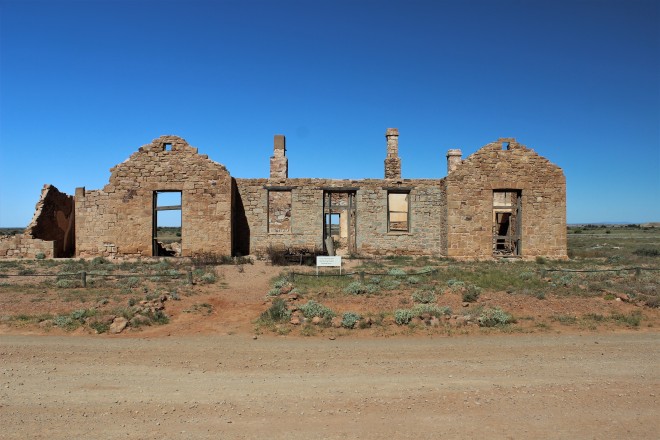 Golden sunset from our camp 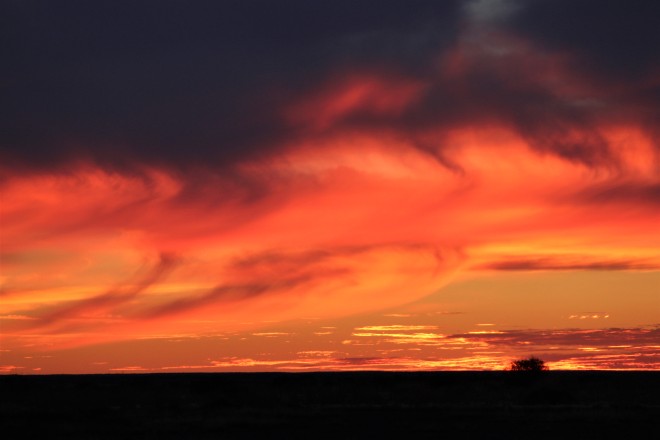 The sunset was fantastic but the storm clouds meant the track might be closed by rains.

It’s interesting to meet unusual people along the way and to chuckle at the humour of these outback places. 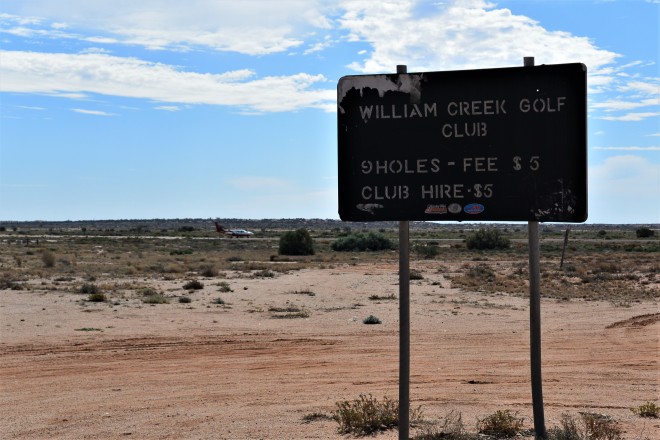 Golf anyone. Only $5 per round and remember that the plane has right of way down the fairway 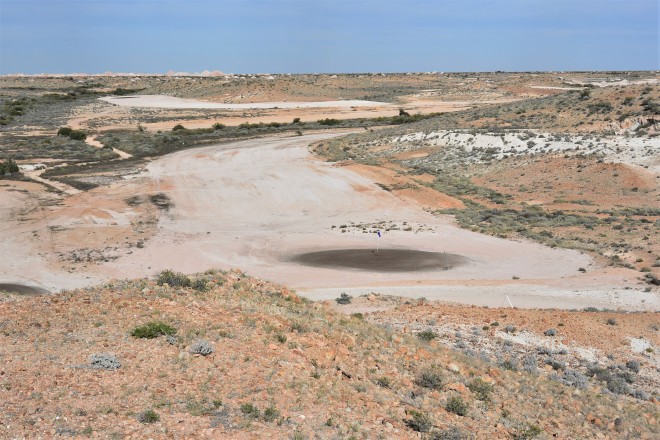 This is a great golf course and affiliated with St Andrews in Scotland. Obviously they never checked out the course !!!

Sometimes  there is a meeting of the “ships of the desert” and this time it happened 25 km north of Lyndhurst. A camaleer and his wife had been walking across country with 6 camels from Gympie in Queensland and were headed west to Roxby Downs. That’s about 2000km as the crow flies and then they have the return journey.

That’s my “ship of the desert” against the tree. Diamant Fatbike with 5 inch tyres and lots of suspension.

The scenery is stunning in its harshness, even when we have had great rains and the vegetation is green and thriving.

Not much greenery here. Spot the bikes parked in the “carpark” at Blanche Cup mound Springs Oodnadatta Track.

Anyway there were too many places to describe and far too many photos to show here.

Then it was back south to revisit a couple of our favourite haunts by kayak. We often paddle past 2 wrecks, one well known, at the edge of suburbia in Gulf St Vincent, and one at the far south end of Gulf St Vincent that few people remember.

The Star of Greece wreck is just out of Adelaide near what was once the small village of Pt Willunga but is now almost a suburb of Adelaide. I have paddled past it countless times over the years taking time to snorkel the area during the summer months, when it is often uncovered. This is an easily achievable paddle for any sea kayaker in good conditions. Generally we launch from Moana Beach and paddle south for an hour or so (6.5km) to reach the wreck which is only 200m off the Pt Willunga beach.

May being History Month I revisited the story of the wreck.

Built in Belfast in 1868, the Star of Greece, laden with wheat, was wrecked in a violent storm off Port Willunga on the 13th July 1888. Some discrepancy exists in the actual number of lives lost, due to doubts about the number of people aboard the vessel when it left Port Adelaide, but most historians conclude that at least 18 perished.

The most striking part of the tragedy was that the ship was only 200 metres from shore when it broke in two amidships at 2.00am. The alarm was raised at 7.20am by a young boy taking his morning walk but because the Willunga telegraph station didn’t open until 9.00am, former harbourmaster Thomas Martin was unable to contact authorities in Adelaide until then.

The response to the call for help was disastrous. A combination of poor communications, bad roads, and an inability to find a good vehicle and horses to bring the necessary rocket gear for a rescue attempt meant that it was 4.00pm when useful help finally arrived. By then all the survivors were ashore and the others aboard had already drowned in the roaring surf.

Local residents had gone to the nearby beach to assist those who did manage to make it to shore. They bore witness to the deaths of those who fell into the sea, exhausted after desperately clinging to the rigging, and those who drowned in the mountainous seas as they tried to swim ashore. Helpless, they waited until some mariners made it to the shallows and then took them to nearby lodgings to recuperate. 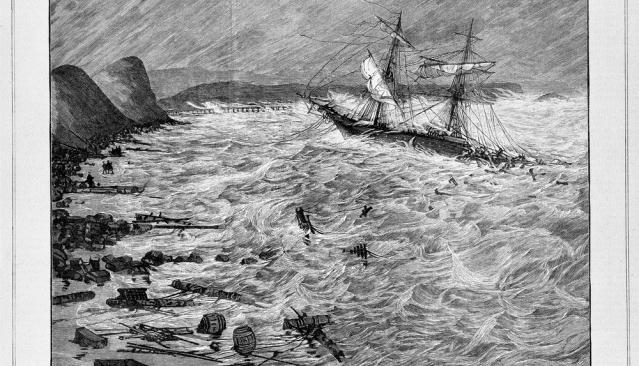 Luckily the Gulf St Vincent where the wreck lies is generally calm and  easily accessible by kayak however I have seen mountainous seas on that beach when the winter SW storms arrive direct from the Antarctic.

One of the other interesting wrecks that I often pass is the Ellen, which lies in shallow water on Morgans Beach, which is the first beach as you pass into Gulf St Vincent rounding Cape Jervis.

On Saturday, 12 December 1908, Ellen returned from Hog Bay on Kangaroo Island en route to a destination on the mainland with a load of fish valued at £50. Ellen encountered very rough conditions when passing Cape Jervis. The rough conditions included a sudden swing in wind direction from the South West to the North West. As a result, the ship drifted astern towards the shore until its stern run aground on the rocky seabed. The bow was then swung around onto the rocks by the waves thereby completing the wrecking. The heavy sea then continued to pound the wrecked vessel, washing fittings and timber overboard and onto the shore. The crew escaped to shore via the use of a dinghy while Mr Newlands swam to the shore.

The Ellen aground at Morgans Beach

Recently I visited Morgans Beach  and stood on the same rock (I think?) as the person in the photograph.

Both wrecks are well worth visiting especially on a calm day when you get a close inspection.
Well that was May, History Month for us.
Ian and Robyn

3 thoughts on “May was History Month”